‘Strange World’ directors explain what happened to the Disney villains

Adventure and exploration are at the heart of ‘Strange World’, the new film from Walt Disney Animation Studios. The 61st film from the animation studio is directed by Don Hall and Qui Nguyen. The second made his feature film debut as a screenwriter in “Raya and the Last Dragon”, where he coincided with Hall, a veteran within Disney, who had also been responsible for other titles of the house such as “Big Hero 6” or ‘ Moana’. We had the opportunity to talk to them before the film’s theatrical release. And they let us know that adventure runs in their veins.

“Strange World” stars the Clade family. Searcher is the father of the family, a farmer who lives happily with his wife, son and dog. But Searcher is also the son of Jaeger Clade, a legendary adventurer. Searcher prefers the quiet life on his farm, but must reluctantly embark on an expedition to save his city. And he fears that, along the way, his son Ethan will discover his father’s love of adventure.. The film takes us to a remote and peculiar place where everything seems to want to kill them. But what it doesn’t look like we’re going to find is a very bad villain.

It’s been a long time since we’ve seen a villain like those of yesteryear in a Disney movie. A Maleficent, an Ursula, a Hades. Perhaps the last was Mother Gothel in “Tangled”. As Disney searches for the “other side” of these villains, we asked Don Hall and Qui Nguyen why the era of super-villains is over: “Movies and series are very much tied to the director’s vision. There are no corporate decisions behind it or bosses giving the green light. You just have an impulse, a seed from which a story grows. Of the films I’ve directed and worked in, what I like is the confusion that there is no specific villain. From the point of view of the story, what interests us is the conflict. What is the reason for the conflict? I think as long as there’s enough conflict between the characters, there’s no need to have a super-villain.. But that’s what I think, other directors will come who will think differently” explains Don Hall. Here Nguyen takes it into the terrain of his film: “It has to do with the pulp stories that we love so much. Many are just ‘man against nature’. The bad guy, or what we consider the bad guy, is nature”. Let them tell the Clades.

The two filmmakers have recalled on more than one occasion that ‘Strange World’ is inspired by the novels of Jules Verne and the Pulp comics (so called due to the poor paper with which the magazines of the early 1900s were printed in which they were printed there were stories of adventures, heroes, damsels in distress, in whose pages there was a boom of science fiction and terror), but they also tell us about another source of inspiration that Don Hall personally consults on a daily basis: National Geographic. “National Geographic is a huge resource. We’ve attended conferences and talked to real explorers. It’s been super exciting” says Nguyen, and his partner explains that the current focus of the ultimate documentary label, “promote exploration in the service of conservation”that’s exactly what they wanted to reflect in their film. 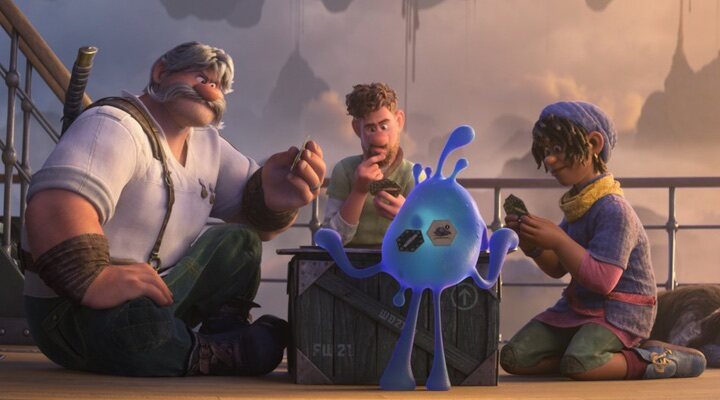 The “strange world” that serves as the main setting for the adventure is full of details, flora and fauna created especially for the film. We also discover in it ‘Primal Post’, the card game with a certain air of ‘Catan’ that Ethan and his friends are obsessed with. Cory Lofts, art director, was tasked with designing the cards for the film, but he couldn’t help but go much further: “He took it very seriously, he’s an amazing artist. He accepted the assignment and he designed the whole game: it has rules, it can be played for real. Might come out if the movie works!” exclaims Don Hall hopefully. He has everything to become the next rage on the schoolyard. You can find out and meet the Clade from November 25 in theaters.